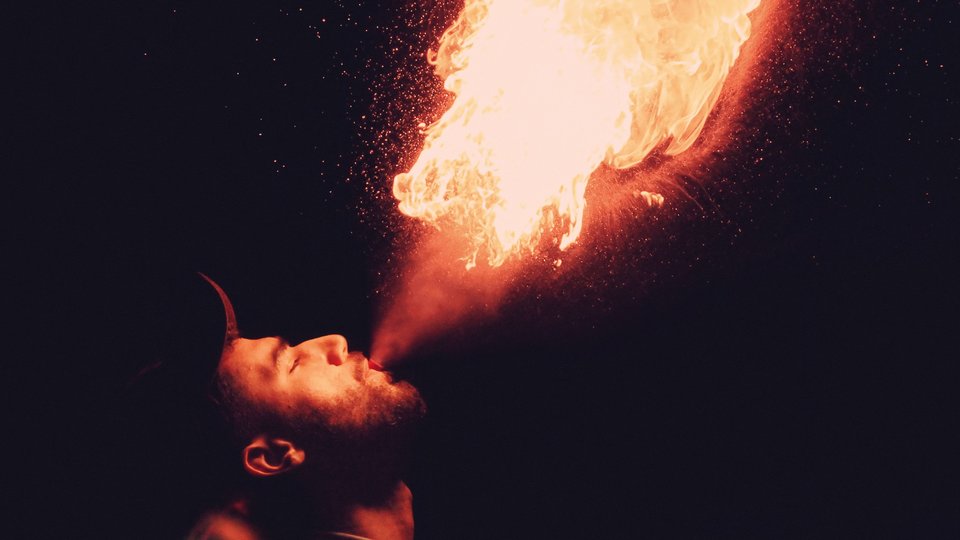 I raised my son Joseph on a steady diet of Bob Dylan. I wasn’t too surprised, therefore, when Joseph became a fan of the young indie-rock and folk songwriter, Connor Oberst. Joseph noticed similarities between the younger artist’s writing style and the familiar phrasing found in some of Dylan’s early work.

One day my son read an article in which Oberst was questioned about whether or not he felt his writing had been influenced by Dylan. His answer was classic. Connor Oberst said Dylan “spits fire.”[1]MTV News Staff, “Conor Oberst Leads John Norris Through His Self-Titled LP, Track By Track,” MTV News. August 04, 2008, Accessed April 25, 2019, http://www.mtv.com/news/1592135/conor-oberst-leads-john-norris-through-his-self-titled-lp-track-by-track/.

I’ve thought of that oblique analogy when I’ve read or preached from the book of James. James “spits fire.” His words are full of heat, and sometimes he can burn with his scorching pronouncements (for instance, in 4:2 he seems to accuse someone of murder).

We know James is probably the most direct and confrontational of any book in the New Testament, which raises a question. What is James exactly? In other words, what kind of literature is it? And does the answer to that question affect how we preach it?

James often sounds like an Old Testament prophet. He’s direct and uses imperatives more frequently than any other New Testament writer. At other times his tone is surprisingly pastoral, addressing his readers at least 15 times as “my brothers” or even “my beloved brothers.”[2]Douglas J Moo, The Letter of James: An Introduction and Commentary, Tyndale New Testament Commentaries (Leicester, England: Inter-Varsity Press, 2000), 36.

Attempting to outline James only highlights the sometimes frustratingly elusive nature of the book’s form, because it defies a familiar or simple structure. We aren’t the first to notice the literary “starts and stops, twists and turns” of James.[3]Gordon D Fee and Douglas K. Stuart, How to Read the Bible Book by Book a Guided Tour. (Grand Rapids, MI: Zondervan, 2002), 398.

Still, in spite of its obvious challenges, James does have form and fits into the larger genre of the epistles. For example, James begins with a typical epistolary greeting identifying a sender and recipients (James 1:1).

It is true James also exudes the tone of Jewish wisdom literature in places, and lends itself to paraenesis, (a kind of generic proverbial literature). That being said, there is still no compelling reason not to interpret and preach James using the same basic hermeneutical guidelines of other epistles.

So, while both acknowledging and yet setting the literary peculiarities and structural uniqueness of James aside, what are some of the interpretive guidelines to remember when preaching the letter? For one thing, you should lean heavily on the imperatives.  Where the circumstances of the ancient world correspond to the circumstances of our own, you can apply James to your situation with unflinching authority.

If the situation in James doesn’t appear to have an immediately obvious contemporary comparison, then rely on context to guide you to the larger principle being addressed. In that way, you will usually see a contemporary preaching application. For instance, when James advises sick people to call for the elders for prayer and anointing with oil (5:14), we acknowledge that’s good spiritual advice. In the 21st century, however, we would likely advise sick church members to also see a doctor. The larger principle of praying for the sick, including anointing with oil if you choose, is still an overarching spiritual principle about the power of prayer and can be preached today, while not ignoring the obvious medical advances of the last 2000 years.

Now, let’s say you’re ready to convert exegesis to exposition. I have one other encouragement drawn from the genre of James itself. Don’t water it down!

James is direct. So don’t lose the thrust of the original timbre when preaching it—in other words, don’t dilute the tone.

God intended James to speak with a prophetic edge in the first century. We can be assured He will still use the straight talk of the text today.

It’s reasonable to conclude the Holy Spirit inspired not only the individual words of James, but the genre and tone of the words expressed as well. So, exegete carefully. Illustrate clearly. Apply deftly. And when you’re preaching James, don’t preach some plain vanilla version. Get up and spit fire!