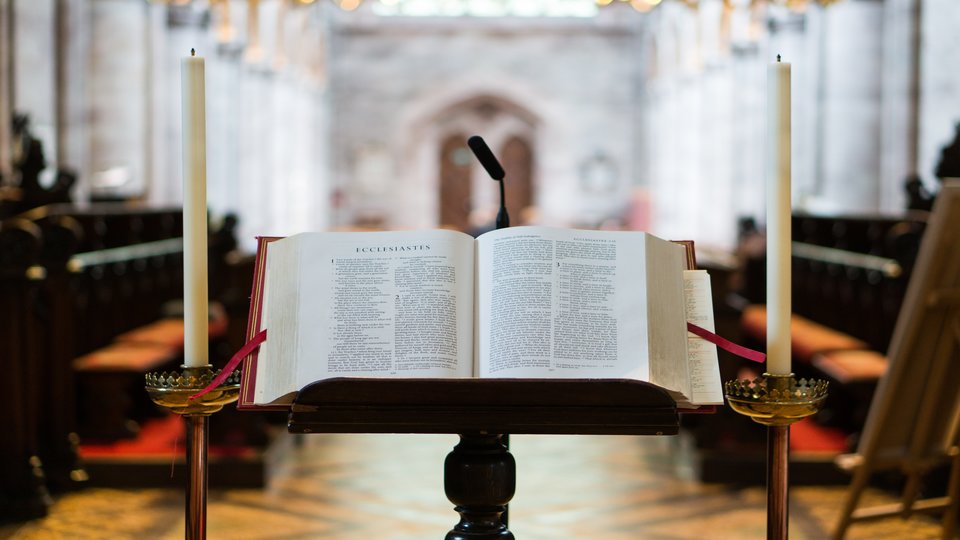 With the advent of post-modernism, the pulpit has lost a bit of its power and grandeur. The preacher is one without authority. During the Reformation, the pulpit was the rudder that steered the culture but now the pulpit is caught amongst the waves from other ships. Unfortunately, this is attitude is reflected in many contemporary churches. The pulpit has been relegated to a political soapbox, a therapeutic couch, or even in some cases a bad infomercial. The pulpit has lost its sacredness.

Yet Darrell Johnson in his book The Glory of Preaching writes,

Whenever a human being, Bible in hand, stands up before a group of other human beings, invites the gathered assembly into a particular text of the Bible and as faithful as possible tries to say again what the living God is saying in the text, something always happens.[1]Darrell Johnson, The Glory of Preaching: Participating in God’s Transformation of the World (Downer Grove: IVP Academic, 2009) 7.

What happens is the mysterious move of the Spirit opening hearts to the living Christ, the Beloved One of the Father, through the inspired text of Scripture. Once again, though, the sacredness of the pulpit has become profane. So let’s consider four elements that make the pulpit sacred.

The Task of the Herald

The first element that contributes to the pulpit’s sacredness has to do with the specific task. In the New Testament, we see the word keryx (herald) applied to those called to preach. In the first century, a herald was an authorized messenger sent by the emperor to deliver a message on his behalf.[2]Johnson, The Glory of Preaching, 83.   The keryx was commissioned with the good news. Mounce states that the keryx was a man of dignity, one who possessed intelligence and prudence.[3]Robert Mounce, The Essential Nature of New Testament Preaching (Eugene OR: Wipf & Stock, 1960) 12.

As applied to preachers of the gospel, we see that the herald is not a cheerleader or therapist but rather a man speaking on behalf of the King. We speak His message. As a keryx we preach the kerygma, the good news concerning Jesus of Nazareth, the Divine and Incarnate Son, who through His death, resurrection, and enthronement has launched a new Kingdom in the world. And anyone who pledges his or her allegiance to Jesus by faith can enter into this new Kingdom.

The Reality of the Preaching Event

The second sacred element of the pulpit deals with the sacred reality of preaching. When we preach the Word we are doing more than telling good stories or offering practical insights. We are entering into the redemptive drama of God. As Mounce argues, “Preaching is that timeless link between God’s redemptive act and man’s apprehension of it.”[4]Mounce, The Essential Nature of New Testament Preaching, 153 He goes on to say that the proclamation of the cross is itself the extension in tie of that very redemptive act.[5]Mounce, The Essential Nature of New Testament Preaching, 154. This means we are not called to simply preaching about the cross. Rather we are preaching the cross and in that moment the redemptive act of the past becomes a present reality. This reality is earth–shaking.

Therefore to preach is not merely standing in a pulpit to speak. Preaching becomes a part of the dynamic event where the living God reproduces his redemptive act to men and women.[6]Donald Miller, Fire in Thy Mouth (New York: Abingdon Press, 1954) 17. But in the sermon, the real Preacher speaking is not the man behind the pulpit. It is the One enthroned in Heaven, the Living Christ is speaking through weak men.

The Role of the Sermon

The third sacred element finds its power in the role of the sermon. Peter Adam’s in his book Speaking God’s Words argues for three foundations for the ministry of the Word: God has spoken, it is written, and preach the Word.[7]Peter Adam, Speaking God’s Words: A Practical Theology of Preaching (Vancouver: Regent College Publishing, 2004) 15–56.  We preach because God has spoken words to His people, it is written in Scripture, and we are exhorted to preach its content. The Bible unveils the reality of God to His people. To say it this way: the Bible is redemptive revelation.

Since this is the case, the role of the sermon is to re-present this redemptive revelation. It is in the sermon that we restate the text’s meaning since the text bears witness to the redeeming Christ. A true text-driven sermon is a sermon that reveals Christ in all of Scripture.

The Assembly of God’s People

Lastly, the sacredness of the pulpit only makes sense within the larger assembly of God’s people. Going to church is more than just giving handshakes and hugs. It is the corporate encounter with the living God. Think for example of the language used in Hebrews 12:18–24. We have not come to what could be touch. Rather we have come to Mount Zion, the city of the living God, to myriads of angels, a festive gathering, to the assembly of the firstborn and to Jesus (v. 22–24). In a very real but spiritual sense as we gather together, we are ushered into the Holy of Holies and join in the angelic worship of the Lamb.

The sacredness of the corporate gathering could not be stressed enough. Both individually and corporately we respond to God in worship. Furthermore, the preaching moment becomes the time when the voice of God is heard. The earthly worship of God’s heavenly people sets the stage for the time of proclamation.

As heralds, we proclaim the sermonic Word to the heavenly assembly and in that moment revelation becomes a redemptive event. This is why the pulpit is sacred. Redemption draweth nigh! It is in the pulpit that the Crucified and Risen Christ speaks to His people through the inspired Word. For a brief few moments’ heaven touches earth in a sacred way unlike other times during the week.

As the people of God have already come to the Holy Mountain, we ascend to its peak, in order to communicate the Word of the living God. We call out from this Mountain, “Behold your God!” We stand on the edge of the Jordan crying out to the rebellious to submit their lives to the King. As the people follow the Lamb outside of the camp, we stand on the wall and declare to them that Jesus is Lord. We herald the Great I Am from the burning bush. The pulpit is a sacred place. So lift your voice! In the words of James Stewart,

Refuse to listen to the lying voices, which insinuate that this is an unpropitious hour for the proclamation of the faith. You are to be the heralds…Go forth, then, in the heartening assurance that this present cataclysmic hour is alive with spiritual potentialities.[8]James Stewart, Heralds of God: A Practical Book on Preaching (Vancouver: Regent College Publishing, 2001) 26.

Michael Cooper is Pastor of Grace Community Church in Mabank, Texas, and a PhD student in the Southwestern Center for Text Driven Preaching.