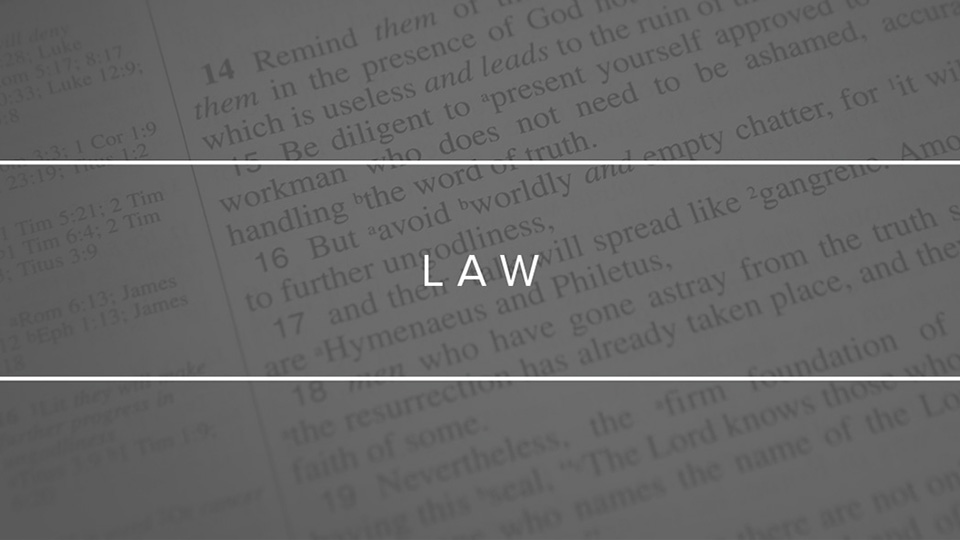 If a prophet or a dreamer of dreams arises among you and gives you a sign or a wonder that he tells you comes to pass, and if he says, ‘Let us go after other gods,’ which you have not known, ‘and let us serve them,’ you shall not listen to that prophet or that dreamer of dreams. For the Lord your God is testing you, to know whether you love the LORD your God with all your heart and with all your soul. You shall walk after the LORD your God and fear him and keep his commandments and obey his voice, and you shall serve him and hold fast to him.

Why Preach the Law?

This is a provocative passage of Scripture. Think of the implication of what he is saying. The Lord their God was going to test them. The test was a prophet that would come in their midst and teach something that was false. This may seem tricky, but it wasn’t at all. It was a test not a trick. A trick intends to deceive. A test from God is intended to build our faith as we follow His commands. And this is why it was not deceitful—they knew the commands.

They knew how God felt about the issues. So, when a false prophet emerged spewing lies and tempting people away from God, they were onto him. They knew he was no good because they knew the law. The reason our people are vulnerable is because they do not know the law. Sheep are easy prey when they cannot defend themselves. And so it is with the contemporary church. The only way to protect people spiritually is to make them strong in the Word. So an understanding of the law was critical then, and it is critical now for the same reason: if our people do not understand the place of the law in the biblical narrative, then they are vulnerable.

So we preach the law so that our people may understand and know Christ. But besides this potential vulnerability, there is another reason to preach law: The prophets are built off the law, and Christ is one of the prophets.

The prophets were calling the people back to follow the God who had explicitly spoken through Moses, as recorded in Deuteronomy. Christ was perceived as a prophet because he called people back to follow God in the same way. Christ indeed redefined the law in the Sermon on the Mount (Matt 5-7), but this was only necessary because the law had been hijacked by self-serving clerics.

There can be no grace without law. The law established the norm that calls us to beg for grace. Paul calls the law a schoolmaster to lead us to Christ (Gal. 3:24,25). Don’t read “taskmaster” there. The point is that a willingness to keep the law that God demands sends us spiraling down to the reality that we have nothing and we are nothing unless Christ saves us from ourselves. The severity of the law is a filter that strains out the sweetness of grace. So, in sum, preaching law protects our people, prepares them for the Gospel, and imitates Christ.

So, How do You Preach Law?

First, remember to preach the law in the context of the biblical narrative. The Ten Commandments, and the laws that follow, are given within the narrative of Israel and Mount Sinai. So be sure to preach the scenes of the story.

Second, remember that all the laws are applicable. When God gave His promise to Abraham, He promised him that all the world would be blessed through him (Gen. 12:3). This idea is even more explicit in Exodus 19:5,6, before the giving of the Ten Commandments, when the Lord says,

Now therefore, if you will indeed obey my voice and keep my covenant, you shall be my treasured possession among all peoples, for all the earth is mine; and you shall be to me a kingdom of priests and a holy nation …”

We wonder how in the world we can apply these laws. The irony is that these were direct commands—they were application—to the original hearers. Some have suggested that the way to apply them is to distinguish between civil, ceremonial, and moral law. However, this is unhelpful in that it suggests that some laws are for us, but not all. It makes it appear as if some laws have more value to us than others. However all of Scripture is a means to lead us to Christ (II Tim. 3:15,16). So, how do we take the difficult laws and apply them?

Third, preach the transferable principle. Behind this law is a principle about the character and nature of God. Identify this principle, and preach it in light of New Testament theology. Think of the wonderful narrative of Moses descending the mountain with his face shining in Exodus 34:29-35. The next verses are a seemingly obscure group of commands on how workmen should honor the Sabbath day that is “holy to the Lord.” From here we see that God asks for time to be given just to Him that is separate (holy) from all other time. Jesus helps us understand that this is not to hold us into legalistic bondage because man was not created for rules, the rules were created to help man, and that He is the Lord of the Sabbath (Mark 2:27, 28).