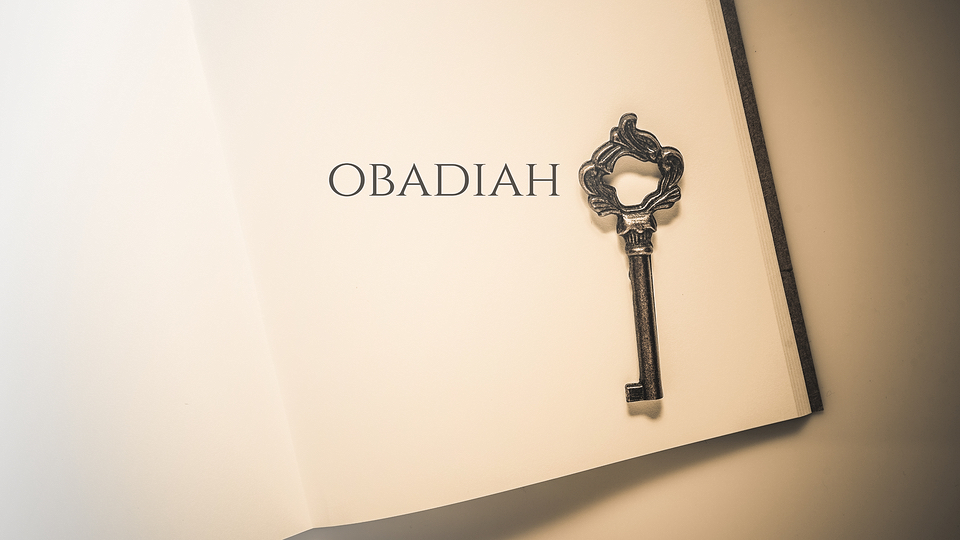 “Turn to the table of contents,” are likely to be the first words you utter in a sermon dealing with Obadiah. This minor prophet, the shortest in the entire Old Testament, is often relegated to obscurity in the hearts and minds of many preachers. Yet, the prophecy packs a punch providing fertile ground to an issue for which all people and cultures continually struggle; Pride.

As Israel was taken captive and eventually exiled by the Babylonians in 586 B.C., the neighboring nation of Edom did nothing to prevent it. Moreover, they took advantage of Israel by selling many of them into slavery and by pillaging their goods. The Edomites, of course, are the descendants of Esau, the brother of Jacob. Their sibling rivalry (Genesis 25-27) provides paradigmatic examples in the way their respective descendants would come to treat one another. Obadiah’s prophecy condemns Edom’s pride and violence against their “brother” Israel. Furthermore, the violence of Edom is a portrayal of all nations who plot evil against the Lord and His people. Obadiah concludes with a promise of future peace offered fully in the coming Kingdom of Christ.

Let us look at the some of the elements of preaching Obadiah through a text-driven framework, that is, a sermon that exposits the structure, substance and spirit of the biblical text.

Preaching the Structure of Obadiah.

Obadiah is one of the few books of the Bible that can be preached thoroughly in two sermons as a natural divide happens somewhere between verses 14 and 15. The preacher will have to draw his own studied conclusion to determine whether v.15 summarizes the previous section or begins a new one.

Preaching the Substance of Obadiah

The genre: The prophetic genre makes use of various communicative forms including narrative, poetry and hortatory speeches. Obadiah, however, is written only as poetry. You will want to look for uses of Hebrew parallelism to unlock much of its meaning.

The Author: We are given very little contextual framework for Obadiah, whose name means “servant/worshipper of Yahweh”. We know nothing about his personal background and family of origin. Moreover, there are some thirteen Obadiah’s mentioned in the Old Testament, none of whom can be identified in this prophecy with absolute certainty. God, not the prophet, remains the focus for authorial intent.

The Main Idea: The final vindication and justice of God is promised over and against the pride of Edom, who will be repaid for their violence and pillage against the people of God. Obadiah discloses the concept of Lex Talionis, whereby God would approximate his wrath against Edom corresponding to the sins they committed against his people. God would especially destroy their military and allow other nations to take over their land (v.19-21).

Key Words and Phrases: Obadiah uses several key words and phrases to depict God’s coming judgment on the Edomites. For example, he uses the word “Day” twelve times to prophecy a future time in which God will vindicate His justice on Edom for their sins against the people of Israel. He says twice that Edom would be “cut down/off” (v. 9 and 14). The proper name for God, Yahweh, also appears seven times in the book highlighting His covenantal promises to love and protect His people against all enemies that would curse them (Genesis 12:1-3).

Key Metaphors and Similes: Obadiah loves metaphor and simile employing several uses in the book. Edom, who inhabited a mountainous region for protection “like an eagle, setting your nest among the stars” (v. 4), would be brought down to earth in humiliation. Israel is not depicted as simply a rival nation but as “your brother Jacob” (v. 10). Verse 16 uses the metaphor of drinking to describe judgment; “just as you drank on My holy mountain, all the nations will drink and swallow” (literally, “gulp and stagger”). The prophet then shifts from water to fire. “The house of Jacob will be a fire, and the house of Joseph a flame; but the house of Esau will be as stubble” (v. 18).

Preaching the Spirit of Obadiah

Despite the invective language used against Edom, Obadiah is a prophecy of hope. Israel is encouraged that while they may be in exile, God had not forgotten His covenantal promises. They were to look towards “the Day” when the enemies of God are crushed and the people of God are vindicated.

“The deliverers will ascend Mount Zion to judge the mountain of Esau, and the kingdom will be the Lord’s” (v. 21).

Obadiah provides ample ways to condemn the prideful acts of our lost world. We are, in many ways, living in the modern day land of Edom and the parallels between then and now are striking. Yet, if we preach against Edom but fail to address Israel, we have missed the point. This text was given not to Edom but to the people of God. Therefore, the preacher would be wise to speak with a tone of hope. The adversary may seem to have the upper hand, but our confidence in God will prevail. This joy should exude from the text as we proclaim it to our people.

Obadiah makes no overt references to Jesus, however, the prophecy of God’s coming Kingdom certainly culminates in the person and work of Jesus Christ.

The Apostle Paul encouraged the Church at Philippi with the following words:

“For this reason also, God highly exalted Him, and bestowed on Him the name which is above every name, so that at the name of Jesus every knee will bow of those who are in heaven and on earth and under the earth, and that every tongue will confess that Jesus Christ is Lord, to the glory of God the Father” – Philippians 2:9-11, NASB.

Our final vindication is accomplished in the finished work of Jesus Christ and the coming of His eternal Kingdom. At that time all His enemies, including the Edom, will become a “footstool for His feet” (Psalm 110:1; Matthew 22:44).