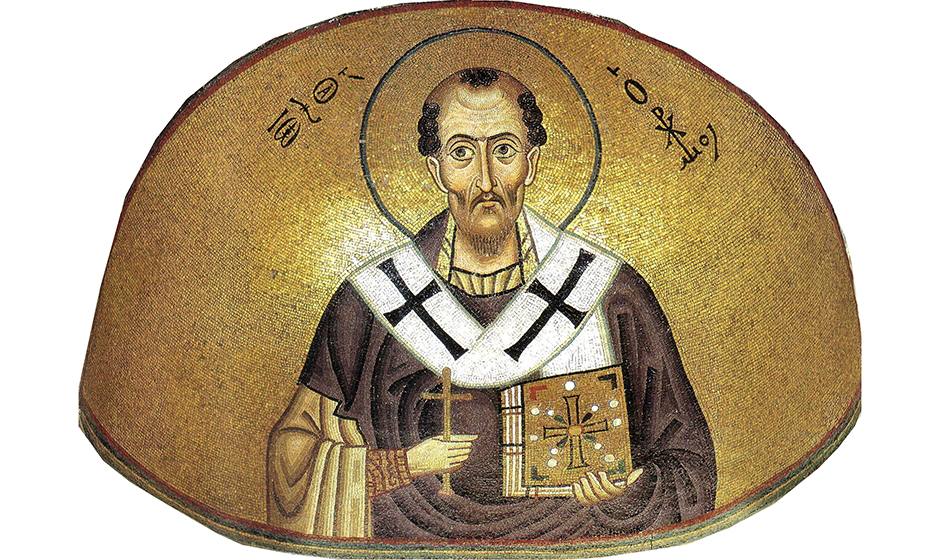 Learning to Preach from John Chrysostom

Few preachers in the early church are more widely celebrated than John Chrysostom. Not only does his name “Chrysostom,” or “Golden-Mouth”, capture the renown of his oratory skills, the simple fact that more of his sermons survive than any other preacher in the early church speaks to his influence and popularity.[1]Paul A. Hartog, “Josh Chrysostom: Golden-Mouthed Preacher,” in A Legacy of Preaching: Apostles to the Revivalists, eds. Benjamin K. Forrest, Kevin L. King, Bill Curtis and Dwane Milioni, volume 1, 126-45 (Grand Rapids: Zondervan, 2018), 128. As such, many works have sifted through his preaching context, style, and method and examined his contribution to the history of preaching.

Reflecting upon these works there is much we can say. For example, there seems to be two broad streams flowing into his preaching: his rhetorical training under the renowned rhetorician, Libanius, and his theological education under the direction of several early Christian theologians.[2]Pauline Allen and Wendy Mayer, John Chrysostom (New York: Routledge, 2000), 26. There is little doubt that he believed the Scriptures were inspired and his sermons were clearly expository as he worked sequentially through biblical books. In many cases his sermons were occasional as he walked with his congregation through the year, encountering various seasons, festivals, and other special events. He was known for his charismatic style and his sermons never lacked immediate application for his audience.[3]Hartog, “Josh Chrysostom,” 136-38. But amid all these fascinating aspects of his preaching, two key lessons stand out: the purpose of preaching and the accountability of the preacher.

The Purpose of Preaching

In the first instance, Chrysostom’s preaching reminds us that the preacher is not called to flatter or entertain the congregation, but to nourish them with the word of God and direct them toward spiritual growth. This does not mean that the preacher is boring. On the contrary, Chrysostom was known for his rhetorical flourishes and alterations between tones of compassion and exhortation.[4]Hartog, “Josh Chrysostom,” 137. His goal, however, was not to entertain but to exhort and edify. Again and again, he challenged his people to live lives marked out by the ethics of the gospel. The Christian is called to be distinctive, to live differently. In his treatise On the Priesthood, one of the earliest treatments of role of the pastor, John writes “For this is the perfection of teaching when the teachers both by what they do, and by what they say as well, bring their disciples to that blessed state of life which Christ appointed for them.”[5]Chrysostom, On the Priesthood, 4.8.

Given this emphasis, he often gave extended time in his sermons to moral issues such as: wealth and poverty, the dangers of entertainment, the need for hospitality, and the perils of slothfulness.[6]Hartog, “Josh Chrysostom,” 133-34. He did not avoid preaching on theological topics, for example, he has a series of sermons on the incomprehensibility of God, but the thrust of his preaching was ethical. This style of preaching was not always received warmly by the congregation, but he believed that if his congregation was going to become more spiritually mature and cultivate habits that promoted spiritual growth they needed a regular dose of ethical exhortation.

The Accountability of the Preacher

As a result of regularly preaching on Christian morality, Chrysostom’s sermons often invoked strong reactions. He was removed from his position twice, and after the second time, he suffered a rather ignoble death in exile. Mobs of unrepentant were ashamed of his calls to discipleship and rejected his exhortations to turn from their sins and follow God.

In the face of threats or praise, the preacher, Chrysostom warned, should not be swayed by the sentiments of the congregation. Again in his work On the Priesthood, John reflects on the twin dangers of neglecting to cultivate the skill of preaching and desiring the praise of the people saying:

For if either of these [preaching well or desire for praise] be lacking, the remaining one becomes useless, owing to its divorce from the other, for if a preacher be indifferent to praise, and yet cannot produce the doctrine ‘which is with grace seasoned with salt,’ [Col 4:6] he becomes despised by the multitude, while he gains nothing from his own nobleness of mind; and if on the other hand he is successful as a preacher, and is overcome by the thought of applause, harm is equally done in turn, both to himself and the multitude, because in his desire for praise he is careful to speak rather with a view to please than to profit.[7]Chrysostom, On the Priesthood, 5.2.

In a time when preachers long for a platform, Chrysostom reminds us that we should never waver from the conviction that the preacher is ultimately accountable to God. The pulpit is not a place to seek popularity or aim satisfied that the desires of the masses. Instead, the preacher is called to proclaim the holy and sacred word of God faithfully and pray that the Spirit would convict and encourage in turn.

There is much more we could say about the figure of Chrysostom. His position in church history makes him one of the earliest and more important figures in the history of preaching and amid everything he did and taught, his emphasis on Christian morality and the preacher’s accountability to God ought to continue to challenge preachers today.

Stephen Presley is Associate Professor of Church History and Director of the Center for Early Christian Studies at Southwestern Baptist Theological Seminary in Fort Worth, Texas.