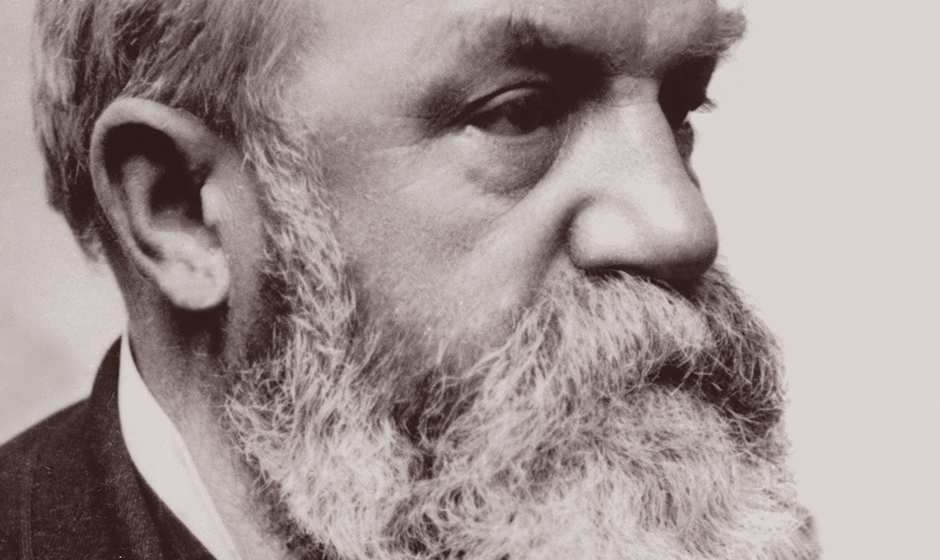 Dwight Lyman Moody was born February 5th, 1837 in East Northfield, Massachusetts. His father died suddenly at the age of forty-one when Moody was just four years old. He was one of nine children, in a family left in poverty, with little or no opportunity for education. The future seemed bleak. Moody, himself would acquire no greater than a fifth-grade education.  He left home for Boston at the age of seventeen to look for work. Finding employment with his uncle Samuel, Moody became a shoe clerk. Samuel and his wife Typhenia encouraged the young Moody to attend church where he could find Christian fellowship. There, a devoted Sunday school teacher named Edward Kimball took interest in Moody and pressed the claims of the gospel upon him. One year after arriving in Boston, Moody surrendered his life to Christ and became a Christian. Neither Moody nor the world would be the same.

Across the landscape of American preaching emerges a mountain of ministerial impact in D. L. Moody. The influence of this one man is nothing less than amazing. Few resumes, if any would compare to his ministerial accomplishments. One biographer described his work, stating that Moody “traveled more than one hundred million miles, addressed more than one hundred million persons, and personally dealt with nearly seven-hundred thousand individuals.” Given the limitations of both, the era and the man, such influence is nothing short of phenomenal. Moody would seem to be an unlikely candidate for sermonic greatness. He was neither cultured nor refined. He was uneducated and untrained for the ministry. He did not fall into the categories of philosopher, thinker, or theologian. Yet, despite any social or educational short-comings, and the lack of any formal training, Moody’s was a preaching ministry that few, if any would rival. By any reasonable standard, the impact of Moody’s ministry is immeasurable.

Moody was not an expository preacher. The rules of text-driven preaching did not serve as his guide. In fact, and this may come as a surprise to some, his sermons contained very little Scripture at all. He often preached from short passages, individual verses, and sometimes focused on a single word. He was a topical preacher. Following the influence of an Englishman named Harry Moorhouse, Moody preached the Bible by subject rather than by text. He was a storyteller and used illustrations to develop his theme. Stories built upon stories were told to paint a picture of the subject he was preaching. In terms of methodology, Moody’s approach to preaching is not recommended. However, despite his sermonic shortcomings, his ministry was not at all unlike that of the Apostle Paul and his companions who, while in Thessalonica, were accused of “turn[ing] the world upside down” (Acts 17:6). What is to account for such an impactful ministry? Why is Moody among some of the most revered preachers in church history? And given such a flawed approach to preaching, what are to learn from him?

Moody’s sermon delivery was conversational. Often it was observed that he, “sounded like he was talking to three or four people on the front row.” With a passion for souls, he spoke in simple language, appealing to the common people. It has been said that “he preached the Gospel with such forceful simplicity that it had great emotional impact.” And they flocked to hear him preach by the thousands, believing that Moody was a man who could identify with them. He even won over intellectuals. Many were converted to Christ when spoke at Oxford and Cambridge. He was a simple man with a simple gospel message that was powerful to speak to hearts and change lives in all walks of life.

Though he would pastor what would become known, after his death, as The Moody Church in Chicago, he was recognized more as an evangelist, rather than a pastor. Moody was passionate to win souls to Christ. The love of God formed the dominant theme of his preaching. He said, “If I wanted to scare men into heaven I would just hold the terror of Hell over their heads and say, ‘go right in.’ But that’s not the way to win men. They don’t have any slaves in heaven. They are all sons, and they must accept salvation voluntarily.” Moody wanted sinners to know that God loved them. Just a month before he died, he was preaching five or six times daily, and he preached with a sense of urgency, always pleading with men to surrender themselves to the Lordship of Christ. He was a man chasing souls for the glory of God.

These days ‘anointed’ is a term that is often avoided in Baptist life. Our fear of being, even remotely identified with Pentecostalism has caused us to relinquish our grasp of a number of biblical truths, including the idea of being anointed by God. But there is nothing to fear. The term simply means to be chosen; to be blessed, enabled and empowered to answer the call of God. In the circles I run in, old-timers refer to this as preaching with “unction.” In other words, there is a sense of the hand of God resting on His messenger as he delivers the Word of the Lord in truth and power. And this “anointed preaching” speaks to the soul.

Moody’s preaching was anointed. His day was not all the unlike ours, in that preachers tended to fall into either of two categories: the educated and the uneducated, those bearing the marks of a sophisticated society and those emerging from the unrefined countryside. Moody was from the latter. He wasn’t refined, cultured, trained, or educated. He possessed none of these advantages. What he did possess was “a profound awareness of the grace of God in [his] own life, and obsessed with one purpose: to call men into that grace which [he himself] experienced in Christ.” And God blessed that! He plucked this simple man out of obscurity, empowered him to preach the Gospel, and used him as a tool to reach countless souls for the glory of God. The work was God’s, and Moody was merely the instrument.

So, what can we learn about preaching from D. L. Moody? We learn that it is not complicated speeches the appeals to the hearts of men, but instead, it is the simplicity of the Gospel. We learn that the passion of any preacher worth his salt, ought to mimic the passion of our Lord, who “came to seek and to save that which was lost” (Luke 19:10). Preachers should preach evangelistically. And finally, we learn that anointed preaching, i.e. preaching with unction or power does not come from the man who preaches, but from the God of whom the Gospel speaks. Dwight Lyman Moody was a simple, ordinary man who served an awesome and extraordinary God, who used his life to turn the world upside down for His glory! Preachers, make your preaching simple; make your preaching evangelistic; be humble before God, and then, may your preaching be anointed.

Jeremy Pruitt is the pastor of Fellowship Baptist Church in Greenwell Springs, Louisiana.