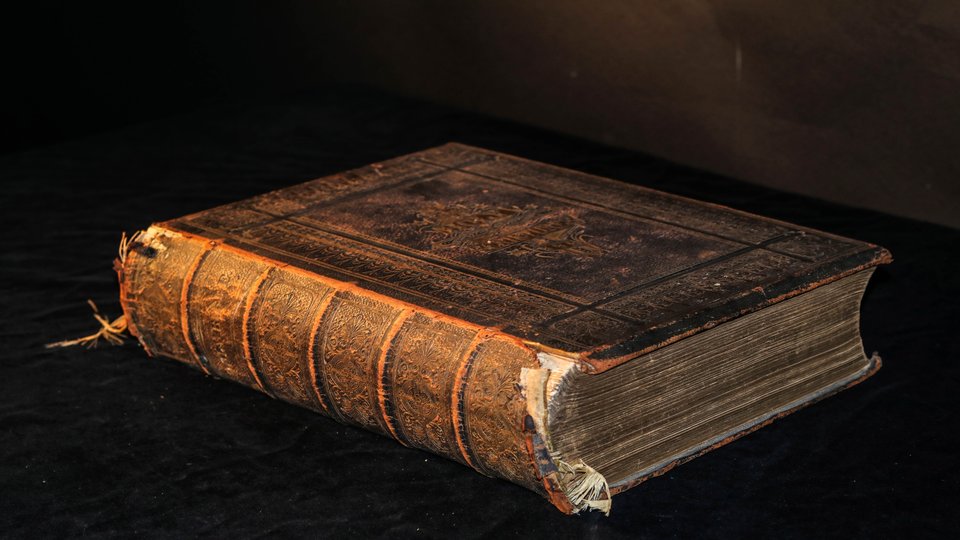 His Words Are Written

These messages from God were not intended to address just the first generation to receive them, Adam notes, but were given to them so “that you may tell it to the next generation” (Ps 48:13). Adam recounts numerous biblical texts which make clear that part of the purpose of the revelation being inscripturated into the Bible was to provide a firm foundation teaching and preaching to the following generations (e.g. Ex 12:26–27, Deut 4:9, Isa 59:21, Rom 15:4, 1 Cor 10:11, Col 4:16).[2]Ibid., 27–35.

Text-driven preaching presupposes a high view of the divine inspiration of Scripture. The plenary verbal view of inspiration asserts that God inspired every word of Scripture. To be “verbal” inspiration means that God’s inspiration extends not just to general concepts and ideas, but to the very words of Scripture. To be “plenary verbal” means that inspiration is fully verbal, extending God’s inspiration to each and every word.  The Holy Spirit so superintended the process of inspiration that every word accurately reflects the Word of God, even though it is within the vocabulary and worldview of the human author. If a preacher does not believe in plenary verbal inspiration, then Scripture might be understood to communicate merely broad, general ideas about God. In that perspective, each word may or may not actually communicate the Word of God, and thus one could not have absolute confidence in the truth of every statement in Scripture. No particular weight could be assigned to the tense, declension, or voice of a word.

However, if each word is divinely inspired, the grammatical details of the word matter. The interpretation of a text and the basis of a point in a sermon might depend upon the tense or some other grammatical detail. Expository preaching presupposes that every word in Scripture is inspired by God, and thus important insights may depend upon the specific meaning of a word as determined by its lexical meaning (taking into account its normal range of meanings according to its tense, declension, or voice).

The inerrancy of Scripture is also foundational for expository preaching. If Scripture is not true, the basis for expositional preaching is merely shifting sand, an unworthy foundation for life. However, if the Word of God is the bedrock of truth, it gives authority and credibility to text-driven preaching (Matt 7:24–29). God’s Word when faithfully proclaimed will not return void but will accomplish God’s purpose effectively (Isa 55:11).

A commitment to the divine inspiration and inerrancy of the Bible demands that the expositor practice good hermeneutics. The faithful expositor who believes that each word of Scripture is divinely inspired ought not handle the Word of God “deceitfully” (2 Cor 4:2), but to rightly divide the Word of truth (2 Tim 2:15). Utilizing sound hermeneutics, the preacher exegetes the Scripture verse by verse, seeking the true meaning of the text. When the preacher is confident of the meaning of the text, the next step is to “expose” this biblical truth to the congregation through the sermon. Vines and Shaddix define “exposition” as “the process of laying open a biblical text in such a way that its original meaning is brought to bear on the lives of contemporary listeners.”[3]Jerry Vines and Jim Shaddix, Power in the Pulpit: How to Prepare and Deliver Expository Sermons (Chicago: Moody, 1999), 28. God will bless the ministry of the preacher who faithfully proclaims the Word of God week by week, who exegetes the Scripture with sound hermeneutics, and who with the guidance of the Holy Spirit exposits those truths with clarity to the lives of the congregation.

Seduced by the sirens of modernity, we have jettisoned a Word-based ministry that is expository in nature. We have in our attempt to be popular and relevant become foolish and irrelevant. Skiing across the surface needs of a fallen sinful humanity, we have turned the pulpit into a pop psychology side show and a feel-good pit stop…Preaching the cross of Christ and the bloody atonement accomplished by His death is the exception, not the norm.[4]Danny Akin, “Southern Baptists: There Is a Future if…,” presentation at “The Mission of Today’s Church,” the annual conference of the Baptist Center for Theology and Ministry, on February 11, 2005.

One would not expect a similar assessment of the state of conservative evangelical Christian preaching from a mainline liberal Protestant such as William Willimon, Dean of the Chapel at Duke University. However, in an article entitled “Been There, Preached That: Today’s Conservatives Sound Like Yesterday’s Liberals,” Willimon laments that many Baptists and other evangelicals have abandoned biblical preaching:

I’m a mainline-liberal-Protestant-Methodist-type Christian. I know we’re soft on Scripture…I know we play fast and loose with Scripture. But I’ve always had this fantasy that somewhere, like in Texas, there were preachers who preached it all, Genesis to Revelation, without blinking an eye, straight from the Scofield Chain Reference—just like Jesus said it. I took great comfort in knowing that, even while I preached a pitifully compromised, “Pealed”-down gospel, that somewhere, good old Bible-believing preachers were offering their congregations the unadulterated Word, straight up. Do you know how disillusioning it has been for me to realize that many of these self-proclaimed biblical preachers now sound more like liberal mainliners than liberal mainliners?”  At the very time those of us in the mainline, old-line, sidelined were repenting of our pop psychological pap and rediscovering the joy of disciplined biblical preaching, these “biblical preachers” were becoming “user friendly” and “inclusive,” taking their homiletical cues from the “felt needs” of us “boomers” and “busters” rather than the excruciating demands of the Bible.[5]William H. Willimon, “Been There, Preached That: Today’s Conservatives Sound Like Yesterday’s Liberals,” Leadership 16 (Fall 1995):76–77.

The Bible was written for the very purpose of providing a solid foundation for preaching and teaching in each generation. May we be text-driven preachers who faithfully proclaim the Word of God!